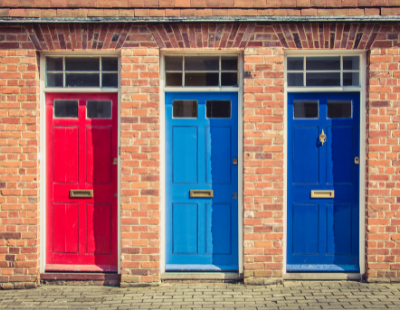 Data from lettings and estate agent, Benham and Reeves, has found which front door colours the nation find the most appealing when looking to buy a home, as a third of homebuyers admit it can influence their decision to view a property, while more than half will judge you as a person based on your front door.

What did the survey find out?

The survey commissioned by Benham and Reeves asked homebuyers who have purchased a property within the last six months, how influential they found the front door when first forming an impression of a property.

Furthermore, a third said it could influence their decision to view, with 17% admitting they would view a home simply because they liked the front door, while 13% would steer clear of a home if they didn’t like it.

The condition of front doors

Front doors don’t just impact how buyers view the property but also informs their opinion of the homeowner. The survey found, 55% of homebuyers admitted to judging the person that owned a property based on the state of their front door.

Cracked or dirty glass was the biggest front door faux pas for potential buyers, topping the list of things that will create a bad first impression. Cracked or peeling paint ranked second, followed by signs of previous damage or repair, leftover Halloween or Christmas decorations and a broken doorbell or knocker.

Reinforced locks or doors sent alarm bells ringing, while joke or offensive doormats, signs that read beware of the dog or kids and themed or musical doorbells were also unpopular with homebuyers.

When it came to colours, Red ranked as the least favourite amongst prospective buyers, while yellow, pink, brown and orange are also unpopular.

Black is the country’s favourite front door colour but for those who like a little more colour, blue, white, grey and green also ranked within the top five colours likely to make a good first impression with the nation’s homebuyers.

Director of Benham and Reeves, Marc von Grundherr, commented: “Your front door can be incredibly influential in forming a good first impression as it’s the first feature a buyer will spend a brief period picking apart as they wait to enter your home. So it’s well worth spending a little time and money to make sure it looks its best as this will help set the tone for the rest of the viewing.

von Grundherr continued: “Cracked windows, peeling paint, a broken doorbell, or a wilted Christmas wreath are not a good look, but even the colour of your front door can be influential.”

von Grundherr advised: “As with most things in the home, you can’t go wrong with a subtle, neutral black or blue and while you may have slightly more colourful tastes, it’s important to remember you are trying to sell and so anything too extravagant could be a potential put off.”